Coyotes in the region

The Shaler Township Police department is aware of Coyotes in the area. Numerous sightings have been reported and confirmed throughout our area. There is no need to report a sighting to the police unless the animal poses a public safety hazard. 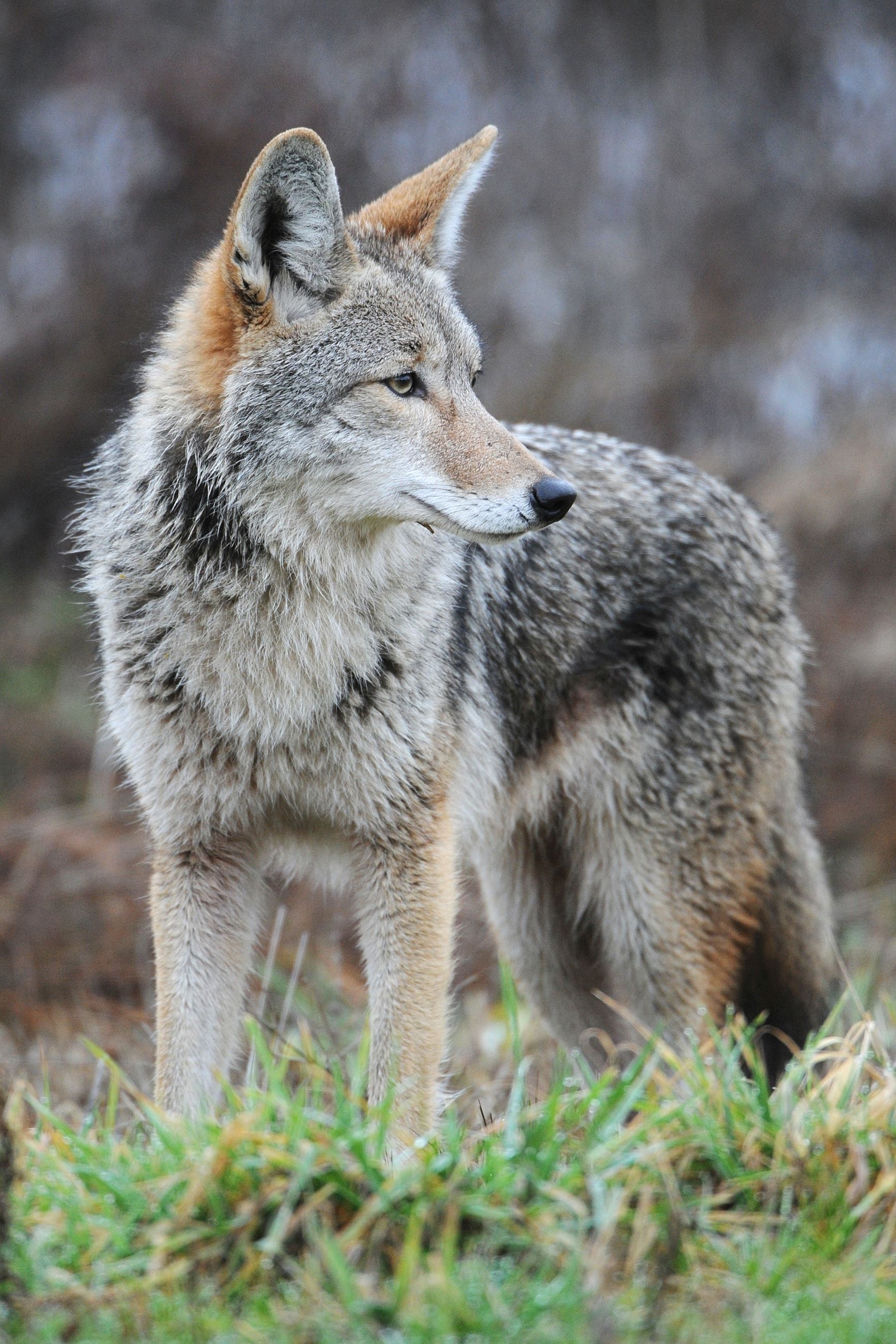 Shedding Light on the Eastern Coyote by PA Game Commission

The folklore and rumors about this somewhat mysterious furbearer seem to have a life of their own. Coyotes have been in Pennsylvania for more than 50 years. We're not sure if they migrated here or were always here. But they weren't stocked by the Game Commission, insurance companies or foresters.

In Pennsylvania, eastern coyotes have become more common than black bears, bobcats and otters over the past 30 years. How these animals live, where they came from, and what we should do about them are topics that are popping up more and more in conversations among Pennsylvanians every day.

Once an animal automatically associated with the West, coyotes now live in every state east of the Mississippi River. In 2005, hunters and trappers harvested more than 20,000 coyotes statewide, according to agency Game-Take and Fur-Taker Survey results. They can be found almost anywhere: from the suburban sprawl surrounding Philadelphia to the remote ridges of the Alleghenies. There are few areas remaining in the state where coyotes aren't found.

But don't expect to see or hear them regularly. This secretive canine prefers to operate under the cover of darkness - unlike its western counterpart - when there are fewer encounters with people. Coyotes - as well as their scat and tracks - are being seen more and more by hunters, hikers and other people who spend many hours afield.

Few Pennsylvania mammals have an ancestral background as untraceable or a lifestyle as obscure as the eastern coyote's. Photographic evidence of coyotes in Pennsylvania first appeared in the 1930s. Their fondness for remote areas and scant numbers pretty much kept them out of the public's eye for decades, except for the occasional one shot by a deer hunter. That changed in the 1980s, when their population began to expand in leaps and bounds.

The Game Commission has spent considerable time and effort over the past decade trying to shed further light on eastern coyotes. This has included research into the canine's behavior, food preferences and origin. What follows is a summary of some of the more interesting information we've uncovered and answers to frequently-asked coyote questions.


How can I identify an eastern coyote?


The eastern coyote is a member of the canid, or dog family. It is larger than its western cousin - typically attributed to wolf-coyote hybridization - and usually has one of four pelt colorations: tri-color (German shepherd-like), red, blond and dark brown (appears black at a distance). Adult males weigh 45 to 55 pounds; females, 35 to 40 pounds. When seeing one for the first time, many people mistake eastern coyotes for dogs. Look for black lines running up and down the front of the front legs, yellow eyes and a cylindrical-shaped, low-hanging tail. Adult coyotes are much larger than foxes, and they tend to travel trails, dirt roads and habitat edges.


Did the Game Commission release coyotes in Pennsylvania?


The eastern coyote's origin has been a topic of debate for some time. Some folks actually believe the agency has stocked coyotes in recent years to reduce deer numbers. Nothing could be further from the truth. Coyotes have been documented in Pennsylvania since the late 1930s and '40s. How they got here, or whether they were here all along, is the missing link to the coyote story. Some biologists believe coyotes have always been a part of Pennsylvania's wildlife community. Others believe western coyotes migrated north into Canada, bred with gray wolves and the resulting hybrid moved south into New England and New York and, eventually, Pennsylvania. Another possibility is that coyotes held in captivity escaped or were set free.

Game Commission stocking stories began in the late '80s after a coyote pup ear-tagged by a wildlife conservation officer was shot by a deer hunter. The pup, which was fitted with a telemetry collar and bobcat ear tag (#0026), was trapped on a Greene County farm where coyotes were killing sheep. It was hoped the pup would lead the officer to its den. Within days, however, the young coyote couldn't be located with radio gear; it apparently had shaken its telemetry collar. The coyote, minus its collar, was shot a few months later. Stories began to spread that it bore a ear tag from a western state, and that at least 25 other coyotes had been released, given the tag's number. The rumors continue.

The Game Commission has never released out-of-state coyotes, or trapped and transferred coyotes, and won't in the future. We have, however, trapped, tagged and released Pennsylvania coyotes for research purposes in recent years. We've also liberalized hunting seasons. Coyotes can be hunted year-round with few exceptions and there are no bag limits. Our coyote population can handle this pressure because it's underutilized and very resilient.


Where's the proof of coyote stockings?


The Game Commission is interested in meeting with anyone who can produce evidence of coyotes being stocked in the Commonwealth at anytime in the last 100 years. We're especially interested in seeing any of the so-called imported coyotes - tattooed, ear-tagged or whatever - that have been seen or found by eyewitnesses. If someone comes forward with evidence, we'll look into it and report our findings to the public.


Do coyotes howl and run in packs?


Coyotes howl infrequently, but when they do, especially on a cold quiet day, or right before dark, it carries for a long way in wild areas. Howls are thought to be used by coyotes to announce their location. Coyotes are known to howl in response to loud noises like fire alarm whistles. They also seem willing to respond to most coyote howling calls, so long as they hear them. Eastern coyotes don't pack like wolves, but do run in family units and pairs. Although families usually break up in autumn, they occasionally stay together until breeding activity starts in mid winter.


Are eastern coyotes a threat to people?


Coyotes usually steer clear of people. They'll leave an area at the first sign of human intrusion. But under the cover of darkness, as human activities slow almost to a halt, coyotes sneak into areas they normally avoid during daylight hours. They canvass agricultural fields, visit picnic sites and backyards in rural areas, and work the waysides of interstate highways in their quest for food. Most people bump into coyotes while hunting, hiking or driving at night. Coyotes rarely display aggressive behavior toward people. If people appear, they usually run. That's good. Still, coyotes deserve our respect. Barring the black bear, it's the state's largest predatory animal. That should be enough reason for anyone to give this animal due respect. There have been a few incidents in the northeastern United States where coyotes have attacked people. Why is unclear, but those who study these animals believe the coyotes mistook the persons attacked as wildlife prey.


Coyotes do kill deer - both adults and fawns - and will feed on deer remains from highway accidents and gut piles left by hunters. A fawn study conducted in 2000 and 2001 on the Quehanna Wild Area and in Penns Valley - near State College - concluded that predators accounted for almost half of all fawn mortalities in the study. Black bears and coyotes were nearly equal in the number of fawns they killed and together, black bears and coyotes, accounted for two-thirds of all predator mortalities. Nonetheless, the fawn survival rates established for the two study areas were comparable to geographic areas similar to our state in the northern reaches of the white-tailed deer range and did not adversely impact the deer population's ability to replenish annual losses caused by hunting, predators and other limiting factors. In addition, we have not seen evidence that coyotes are killing a significant number of healthy adult deer in Pennsylvania. Being opportunists, they tend to spend more time patrolling the shoulders of state highways to consume deer killed in collisions with vehicles than stalking mature whitetails.


How can I tell if a coyote killed a deer?


Coyotes usually kill deer by grabbing and holding onto their throats. Then they consume the internal organs, particularly the liver, which is very nutritious. Dogs, on the other hand, take down deer by grabbing the hind quarters, which is also where they typically start eating.


Will coyotes prey upon domesticated animals?


Coyotes are opportunists. They'll eat almost anything. Coyotes do spend considerable time mousing, but they'll settle in a second for a rotting road-killed deer, or a cat or small dog that strays too far from the house. Coyotes raising young can be a problem for farmers during spring and summer. Sheep, chickens and ducks are especially vulnerable. Most times coyotes kill what they need and leave with it. But on occasion they seem to go on killing sprees.

Once an animal that could be found only in Pennsylvania's most remote settings, coyotes, with each passing year, have been discovered closer and closer to civilization. As they adapt to living in the suburbs, their way of life may change. Given this situation, the profile on Pennsylvania's coyotes may be incomplete. But let's face it, as cunning and large as this canid is, it's quite capable of almost anything as it relates to disturbing and killing pets and some farm animals. So play it safe, give coyotes the consideration they deserve.


Would placing a bounty on coyotes help reduce their numbers?


Bounties were placed on coyotes in western states for decades and they didn't lead to any significant population reduction. The main reason was that about 70 percent of a coyote population has to be removed annually in order to cause a population decline. Even then, coyotes - like many other species - have demonstrated an ability to offset population declines by increasing their litter size. It's spurred by a built-in biological mechanism that responds to population deficits.

A bounty system has never successfully eliminated or significantly reduced coyote populations anywhere in North America. Coyotes d. have a superior ability to adapt to a changing environment. Attempts to reduce coyote populations in western states using year-round poisoning, hunting and trapping resulted in millions of dollars being spent over many decades with little reduction in coyote numbers. The result of any predator control method is temporary and often very localized. No measurable good ever resulted from the Game Commission's predator bounties in the 1900s. They truly were a waste of money.


Is it easy to hunt or trap coyotes?


Coyotes are very elusive when it comes to hunting and trapping them. You shouldn't expect to head afield and harvest them without considerable effort and planning. Although a substantial number of coyotes are taken annually by trappers and by hunters who call them, the largest part of the harvest is taken by deer hunters and fox trappers. The Game Commission has maintained liberal hunting opportunities for coyotes with an eye toward interesting more Pennsylvanians in pursuing them. And, more are. But it's tough to take one. Just ask anyone who hunts coyotes. The same applies to trapping. To generate more interest among trappers, the agency now permits certified trappers to use cable restraints for taking coyotes.
[]